Who would have thought that while pinned in the middle seat on a late night flight from New York to Portland, that bed bugs on the plane would be feasting on my ankles. It’s not surprising at all considering the rules about putting your bags on the floor for most of the flight. I thought I had made it out of New York without encountering bed bugs, but alas…

What happened next you ask? 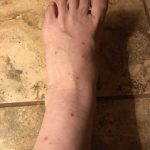 When I got home I took a bath and that’s when I saw the bites on my feet and ankles. I was horrified!

I put my carryon in a sturdy trash bag and sealed it tightly. All my clothing, bags, purses went into a trash bag and I left it in the tub till the next day because, it was late. The next day purses, luggage, etc went into my bed bug oven, which doesn’t get used much but once again demonstrated it’s value. All the clothes went into the laundry. I used a sharpie to mark the bites just in case new bites showed up.

Then I wrote the airline an email letting them know my experience. I did receive a reply, not a very satisfying one but they did reply.

How do I know it was bed bugs you ask?

I’ll never know for sure but you look at the photos and try to think of an insect that has such a distinctive pattern. I will never be 100% certain but, I took the precautions I could and tried to put it behind me.